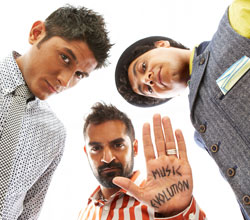 After the success of Don and Monsoon Wedding, the dynamic duo of Indian electronica are back! This time tag teaming with friend and co-producer of their latest album, Karsh Kale.

Punditz + Kale have certainly kicked it up a few notches on the latest bollywood film soundtrack Karthik Calling Karthik. Fusing elements of rock with edgy electronica adding their unique trademarks.

This entry was posted on 26/01/2010 by sanjaykundalia. It was filed under midival punditz and was tagged with bollywood, delhi, midival punditz, six degrees records.