Back in April I posted a three part-er on RAJ:RELOAD where I was exposed some of the most talented artists and diverse music!

As a part of that weekend I was able to see and meet DJ Tigerstyle remix India’s first oscar nominated film – Mother India!

On Thursday Republic of Brown, based in Los Angeles is dedicated in bringing you everything Indo-cool from entertainment and lifestyle scene, cutting-edge music, films, literature and much more! 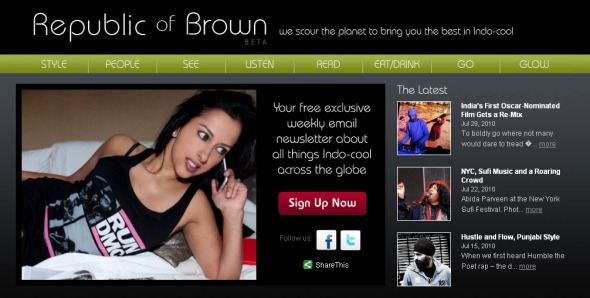 Republic of Brown is the brainchild of Geetanjali Dhillon, former  civil rights lawyer turned new media executive. With roots in London and Punjab and now Los Angeles, Geetanjali founded Republic of Brown to uncover and share the coolness of all things Indian with the world.

This entry was posted on 01/08/2010 by sanjaykundalia. It was filed under republic of brown and was tagged with DJ Tigerstyle, geetanjali dhillon, Kala Phool, Mother Indian, Remix, republic of brown, sanjay kundalia.