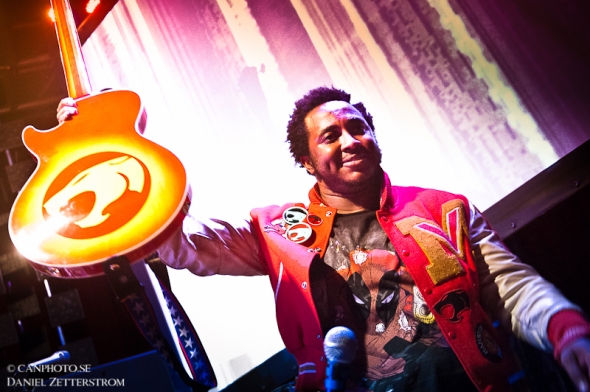 After listening to a lot of Asiatic electronica these past few weeks and so I developed a bit of an itch, wanting hear something different, something I wasn’t used to nor would I be listening to it just once.

While listening to Flying Lotus’ [FlyLo] ‘Cosmogramma’, I came across a bass player from California, the son of Temptations drummer Ronald Bruner Sr, brother to Grammy winner – drummer Ronald Bruner, Jr and named after what I can only call one of the greatest 80’s cartoons ever made.

Enter Stephen Bruner aka THUNDERCAT. He has had a pretty fruitful career over the last few years [being only 26]. Playing bass for artists such as Snoop Dogg, singer Eric Benet, bass legend Stanley Clarke and Sa-Ra Creative Partners, not to mention being an involved member of the band ’Suicidal Tendencies’

THUNDERCAT has built up quite a reputation for himself with his lightning quick bass lines, but it was only after his involvement in ‘Cosmogramma’ and a bit of support from his friend FlyLo did he Burner start work on his début album – ‘The Golden Age of Apocalypse’.

‘The Golden Age of Apocalypse’, is a record unique and strange record for me, I don’t quite understand it but I find it fascinating and it has sparked my curiosity into THUNDERCAT’s particular style of music.

The Bass plays a massive importance on this album, a crucial instrument that gives ambience, rhythm and depth to tracks. As a result the bass virtuoso with the help of co-producer FlyLo merges the creativity of soulful jazz and funk to the intergalactic synths, silky chords and blissful frequencies all tied up with THUNDERCAT‘s nimble fast fingered bass playing making the experience truly astral.