The evening of two halves was introduced by the Asian Music Circuit who curated the night’s performances. The first half of the show was a collaboration of two cultures – that of India and Cuba via London. Hari Sivanesan, a Veena player and Pirashanna Thevarajah, a thunderous Mridangam maestro both London born were joined by two wonderful musicians from Cuba, the much-admired Cuban violinist Omar Puente and percussionist Oscar Martinez.

This quartet unravelled a beautiful concoction of sounds that amalgamated the structure and discipline of the South Indian Carnatic style with the more playful jazz laced rhythms of Cuba. Contrary to what people may think, these two styles marry well. This is beautifully demonstrated on the track “Vio-Veena” (written by Puente) which as the name suggests was an exchange between the Violin and Veena, against a backdrop of Indian and Cuban percussion.

“Maa” (meaning Mother) was a commissioned piece (written by Hari) for the show, which as Hari described is about the message of the mother’s love through melody – representing a journey of lullabies from various cultures around the world.

A fabulous display of musical vigour!

After a short break, Shammi Pithia and his band FLUX were up … This was certainly a treat for the audience as they got to experience some of the tracks from his new EP “Paredolia” (OUT NOW). Shammi was joined on stage with some of the finest home grown musicians London has to offer:

There were some magnificent renditions from his first EP “Cinema for the Ears” and debut album “Audio Descriptive” and a couple of FLUX tracks – The Seeker, Poem without Words, Overcome, Pacifist and Ajnabee Anjani, to name a few.

Singing on the night was a pool of talent: the very soulful Ambika Jois who showcased her tremendously powerful voice with such charisma. The classical vocalist Unnati Dasgupta, Urban/R’n’B artist Ash King and providing Hindustani classical vocals was the spectacular Jatanil Banerjee, who moved the crowd with Ajnabee Anjani.

What a second half! – the audience were certainly wowed, after the show there was a buzz in the atmosphere. The crowd’s reaction was a direct result of the hard work of bringing together 12 people (no easy task) and executing that show like it was a walk in the park. Watching them on stage was a brilliant, smiles and banter amongst the musicians made the set more enjoyable to experience!

I’ve been following Shammi’s music since the release of his first EP and the progress he has made is outstanding. He is certainly building a solid name for himself as a composer/producer and multi-instrumentalist. As I tweeted on the night “Composers when in their element must be connected to the divine. It requires a certain level of genius to achieve this” and that is Shammi!

My respects go out to all the musicians and singers who performed on the night … it was a night of epic proportions!

*Thanks to Kabir Gobin for providing the video footage. 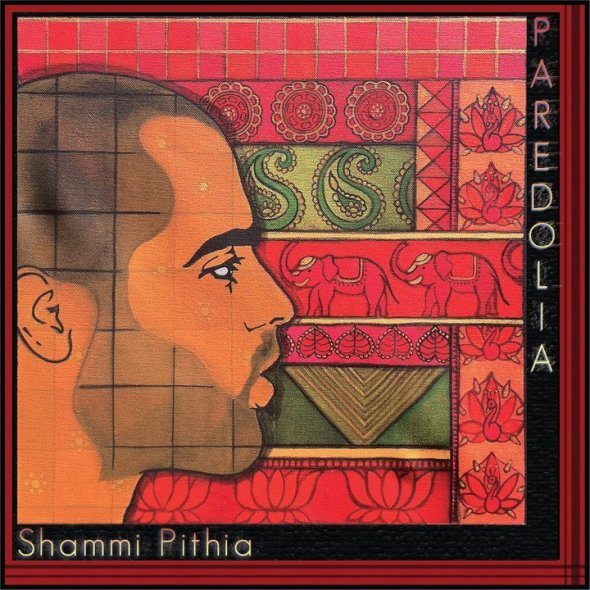 When I heard Shammi was producing a new E.P. naturally I was stoked. The musician who crafted “Cinema for the Ears E.P.” and debut album “Audio Descriptive” was on his next venture.

His latest E.P titled “Paredolia” is composed of six tracks, each individually bringing a different story to the ears leaving the listener to find their own meaning of the music.

“Switch” introduces the E.P with a somewhat dark sound but 22 seconds in, the equation is balanced with the elegant Bansuri. Naturally these sounds wouldn’t work together but on this track they manifest a harmonious contradiction. As the director Shekhar Kapoor said “if you take contradictions away there would be no creativity.” As the Bansuri dances majestically with its dark bassline partner, the vocals of Rita Morar give it that defining human emotion.

This is soon followed by the title track of the E.P “Paredolia.” A beautiful track introduced by the humble piano married with deep bass and the constant thread that weaves the story of this record together – the Bansuri. It’s an excursion of the two instruments that does not need words to tell the story – the feeling it draws out says it all.

To counter the soothing vibes of the previous track, Shammi launches into “Thanks to a Busker” an Indo-Latino number with the help of the fabulous vocalists Ambika Jois and Ash King – a very romantic flamenco style track with funky bass lines, sexy guitar riffs.

On to the fourth track “Taareyan di Chaan” – meaning Shade of the stars is an abstract poetic song about longing to meet a lover sang in entirely in Punjabi. Japjit Kaur graces us with her gorgeous and elegant voice giving the track a contemporary yet folksy feel.

The penultimate track, “True” is one composed entirely of strings. The polite yet playful sounds of the Cello, Violin and Guitar really give that old fashion warm feeling to the track. It reminded me of some of the work done by Michael Giacchino on the TV programme LOST, really capturing the moments of happiness and truth – something Shammi does very well here – an unadulterated melt of sublime soundscapes.

Finally we come to a “Sweet Nothings (Phaeleh Remix)” – and what a way to end the E.P! Phaeleh, the Bristol based prolific producer has his way with “Sweet Nothings” as featured on the “Audio Descriptive” album. This is a track where the affable vocals of Japjit Kaur, Bansuri and the dark melodies of downtempo electronica melt together into a beautiful frenzy.

Shammi Pithia, has the ability to absorb the sights, sounds and influences around him and translate them to what we hear, giving each string, raga, chord, beat and baseline a purpose in the grand scheme of things. If you liked any of his previous work you will adore “Paredolia”.

What a fabulous gig to end an outstanding year of music. I was blessed to experience Shammi Pithia and Engine Earz Experiment on the same night.

Two different acts with one thing in common. A Passion for music.

Both Shammi and Prashant (Engine Earz) gave it their all. Communicating different emotions and displaying different styles of music for the audience to experience.

From the wafting, sonorous flute lines drift across the drums, sitar, violin and cello by Shammi and Co where each track was moving, reflective and inspiring!

The atmosphere was electric. Couldn’t really ask for more!

So, as a treat. Here is some of the footage from the Shammi Pithia set featuring Aggi Dukes, Ash King, Japjit Kaur, Anuti Dasgupta and the band FLUX.

In the coming years … I can see Shammi Pithia and Engine Earz performing at the Royal Albert Hall… Now that would be an unmissable performance!

Shammi Pithia – Until I Hit The Ground