I got to the RichMix a couple of hours early as I was meeting a good friend (TJ Chana, Asian Underground London FB) to chill out and chat with. To my surprise and sheer good fortune Karsh Kale, Midival Punditz, Vishal Vaid and Pt. Ajay Prasanna where busy sound testing. Can you imagine the excitement within? Being a fan of these gents as long as I’ve been a fan of Talvin’s I got the opportunity to watch them fine tune their performance – a true blessing.

After having dinner with them and the legendary Osmani Soundz and Shandy from The Nasha Experience we made our way back to the venue to an absolutely pumpin’ vibe. Bobby Friction was on the decks busting some of the finest dubstep getting the crowd warmed up for one amazing night.

Like majority of the people I had been waiting for this for ages! The last time they were in London together was 1999 when Karsh and Punditz first met! The place went MENTAL when Karsh, Punditz, Vishal and Pt Ajay walked on stage.

Below pics & vids by TJ Chana: 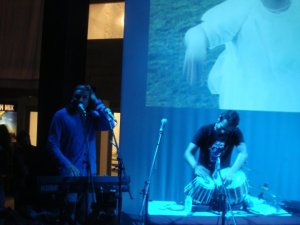 Jumping straight into the first track PD7 from the album Breathing Under Water a great way to start. Intense table beats and drum n bass combined with beautiful melodies being played by Pt Ajay on the Bansuri was a treat!

Next up was Letting Go from the album Liberation. This time, Karsh switching from Tabla to the drum kit and a fantastic entry number for Vishal Vaid, whose voice captivated the crowd. I was watching some of the reactions of some of people around me and their eyes popped. 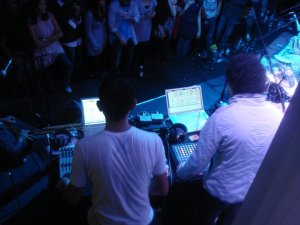 This track carries you off to a totally different place if you allowed it to soak into and through you. Utilising Vishal’s vocals to the best of its ability.

After Har Ek Baat (Hello Hello) and a new track called Beqaraar came another new one which TJ warned me it would mess me up … and it did! A track drenched in complex tabla beats, intense electronics and fast melodies on the Bansuri enough to drive any music fan crazy. It was just a pure concentrated audio experience!

Then a track we had all been waiting for, named after his daughter and on the original featured tabla maestro himself Zakir Hussain! A beautiful improvisation and an expansion of the original just enhanced it tenfold! I don’t have need to say anything more … just watch the below clip …

After Milan, my favourite track off the album Hello Hello and originally sung by Angaraag Papon Mahanta was on. Naina Laagey, a seriously beautiful track. I cannot fault it in any way, was simply enchanting and breath-taking.

Heres the original: Live at Paleo Fest 09 not RichMix.

They ended the gig with Challa. 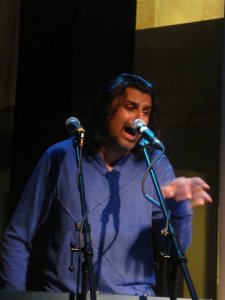 “the government is picking up the pieces after KK, MPz VV and Pt.AP smashed London” … TJ Chana

Im a huge fan of these guys, got all their albums etc. However there’s nothing like watching your favourite artists performing on stage just a few feet away from you and really bringing alive what you’ve been listening to through speakers and earphones for so many years. It’s how the tracks were intended to be heard LIVE! As I mentioned before there were some

fantastic renditions of original tracks and that a good thing! You don’t want to be hearing the same version as the CD, you want that extra spin, something unique that puts their talents on display which they delivered gracefully.

All the guys are incredibly down to earth, and that’s probably one of the best things about the music I listen to, getting to interact with the artists and finding out they’re just like you and me. The great thing about the gig was the reaction of fans. Watching their faces light up track after track, seeing a constant smile of appreciation made it all worth it in the end!

By far one of the best gigs I’ve been too!

I know for a fact the gig was only a fraction of what they are capable of, I just hope they keep coming back to the UK and allowing us to experience their life’s work.

Thank you: Karsh, Gaurav, Tapan, Vishal, Pt. Ajay, Osmani Soundz, Shandy, TJ Chana!! and Thank you to all those that follow the NADA:BRAHMAN and support the Asian Underground FB page, fantastic meeting you guys hope to see you all again.