When I discovered Electronica, my Hip Hop, R’n’b, Rap collected started to fade out, then I realized that there wasn’t much mean or depth in what I was listening to.

Subjects like guns, drugs, hoes and sex being talked about,  having a negative impact on society. We already live in a messed up world, and a powerful tool such as music can have a massive impact in changing the mindset of a person either into something inspiring or destructive. 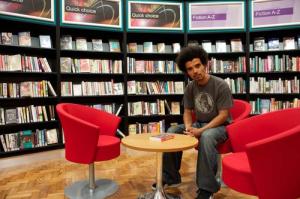 Earlier this year I aired my views on my Facebook status on the matter. My friend Raghav Bhatt then pastes a link on to my wall … “Check this guy out, he’s different” … I thought … “Yeah right” … but how wrong was I!  …

I was introduced to an artist who has been dubbed as the KRS One of UK. Akala, a MOBO Award-winning British rap and hip hop artist from the Kentish Town, London is what I believe is missing in the Hip Hop world today. Touching on topics of race, class, sexism, history, war, hip-hop culture and what it is to live in a world one knows to be inherently unequal, yet rounds it all off not with accusations or anger but inward self-analysis.

Listening to Akala you get the feeling he is not just great at stringing words together to make it sound good but he understands different philosophies and has the ability to repackage it to make it accessible to the wider audience. Indeed, Akala’s refusal and inability to conform to prevailing stereotypes means that his records are largely ignored by the sections of the media that speak authentically of the “urban experience” … not surprising as now a days it feels as if we are being dumbed down by what we see, read and hear through different medium.

Akala (the name meaning “immovable”) is a teacher himself. He set up the Hip Hop Shakespeare Company which is supported by the BBC and was opened by Sir Ian McKellan – this project is Akala’s brainchild – going to various cities in the UK trying to get the ‘troubled’ youth into reading and learning via performing Shakespeare plays.

More recently the latest album from MOBO Award-winner is Doublethink is inspired by Orwell’s “1984”, Huxley’s “Brave New World” and Zamyatin’s “We”.

Here are a couple of facts about Akala:

Really looking forward to more from Akala … this is was I love, making a difference in the world rather than just making it go around. Nuff respect!